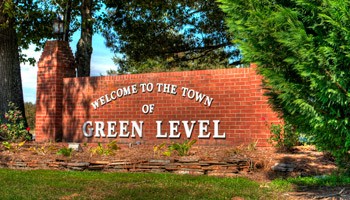 Green Level was originally called Ruby Dew back in the 1930’s. It was a small tobacco farming community that was heavily populated by African Americans. The first school that was built in 1934 for the students of Green Level is still standing today and served as the old Town Hall. Known as Green Level Elementary School, the school hosted students in grades 1-8.

In 1990, the residents of Green Level decided to incorporate the community to officially make it a municipality. The Town adopted a Mayor-Council form of government and elected is first officials.

With the swearing-in ceremony, the official birthday for the Town of Green Level is July 17, 1990. The ceremony was held at Green Level United Church of Christ.

The Town is continuing to grow and prosper. With the Bedford Hills subdivision, which was completed in 2019, the Town added 250 single family homes to the community. Additionally, the Town is aggressively looking for businesses and industry that would benefit the residents of Green Level.

The Town of Green Level is the home of the first Alamance County Sheriff’s Department police substation.